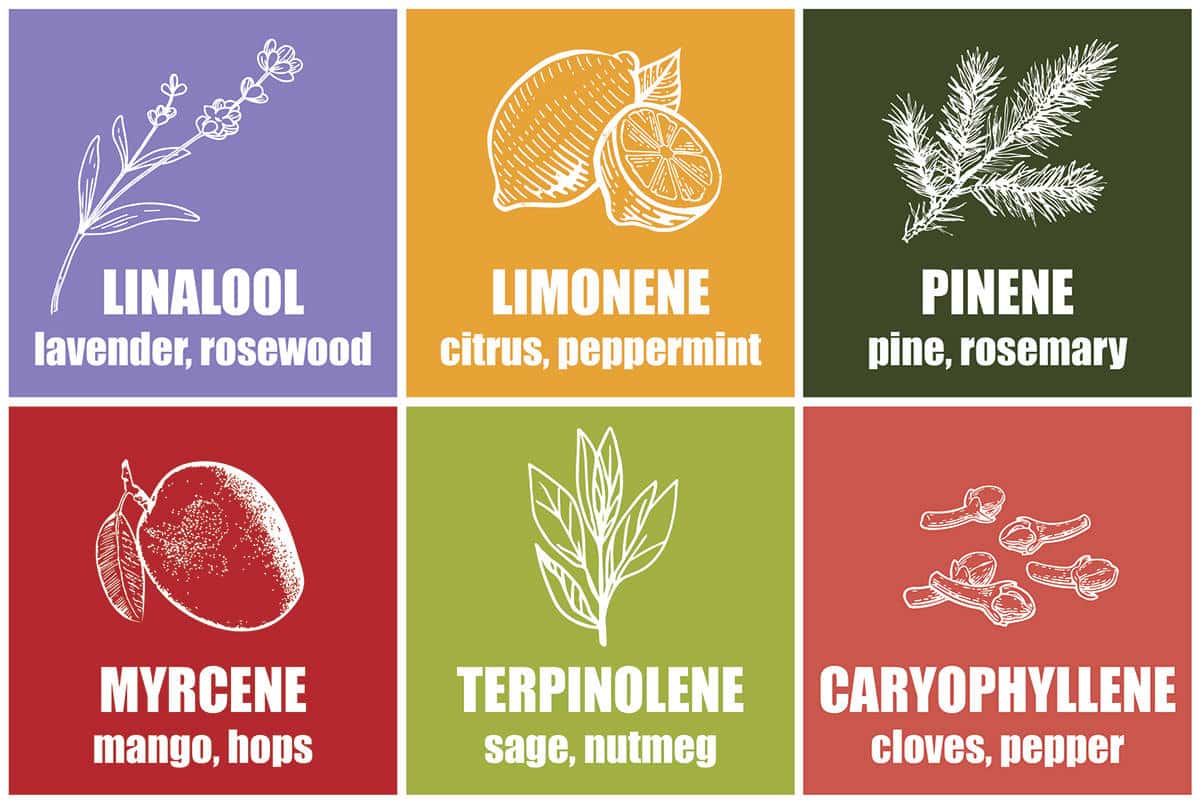 Terpenes Weed | THC Terpenes | What Are Terpenes In Weed

Cannabis Terpenes | What Are Terpenes In Weed

Terpenes weed what does that even mean? Walking into a medical marijuana dispensary can feel a little intimidating. If patients are just beginning their journey of discovery of the cannabis plant and its seemingly endless number of strains and their effects, you might not know where to begin when trying to find your niche. Additionally, in today’s medicinal marijuana world, it seems like right next to the price tag is always the THC content, with no other indicator. It would make one believe that to be the deciding factor, if not the only thing that matters when making your decision on what strain to purchase. If one strain has 18% and is sitting next to another posting up 24%, one might assume more is better, because why wouldn’t they. But what does that mean, more what? Will the extra 6% of THC make your buds more pungent, sticky, citric, or make you more creative, hungrier, or maybe it makes you more anxious or sleepy? Releaf Medical would like to inform patients about cannabis terpenes, a very critical component when selecting the right strain for a patient’s treatment plan.

We should stop this practice of making the percent of THC in your marijuana be the most important factor when buying weed. Terpenes in weed should be more of a focus. Patients are thinking, terpenes weed, what does that even mean and why is this so complicated, I just want to purchase some medical marijuana. Thankfully, some very kind and dedicated (and probably really high) souls have done immense amounts of research on cannabis, cannabis terpenes, THC terpenes, what it comprises, and what elements of your cannabis contribute to size, shape, color, aroma, taste, stickiness, and maybe most importantly what they do to you. While the percentage of THC in your bud is important, it overlooks what is possibly the most important reason you are purchasing your medical marijuana, what are terpenes in weed and what are their effects?

In the wild, there are over 20,000 terpenes that can be found in most plants, from fruits and herbs to trees and vegetables. If you’ve ever wondered why pine trees smell so piney, or why carrots are orange, you can thank terpenes. Hell, Vitamin A is a terpene. So, terpenes are everywhere, and they all have distinct qualities. What do they do?

What are terpenes in weed? There are over 100 known cannabis terpenes or THC terpenes, but you’re not going to get more than a few per strain. They are responsible for most of the distinct aromas, tastes, and most importantly the effects of the strain of cannabis you want to buy from the dispensary. The ultimate goal is to know which cannabis terpenes and what combination of terpenes in weed make you feel hazy and destined for a snack and snooze after a gravity bong rip of White Widow, and why that joint of Strawberry Haze you had for lunch makes you want to write a screenplay with your buddies about a TikTok stream that hypnotizes its viewers until they watch so long they wither away and starve to death, but with puppets.

Get Your Medical Marijuana Card Today!

Terpenes in weed contribute to the entourage effect, which is how all of the components of your weed interact and boost each other’s effects. Terpenes and cannabinoids are the two major components of Trichomes, a fancy word for the clear or milky white stuff on the outside of the buds that protects the plant from pathogens, UV radiation, and intruders, and also happens to be the part of the plant that produces the aroma, flavor, and many of the effects. If you have a very high CDB (cannabinoid) content in a strain, you will want certain terpenes to interact and heighten the pain relief component of the CBD. There are so many permutations that your head can spin, so this should help you start you on your journey to finding your perfect terpene combination.

What Are Some Popular Cannabis Terpenes and What Do They Do?

Four of the most common and noticeable terpenes in weed or THC terpenes (through smell, taste, and effects) are Myrcene, Limonene, Pinene, and Terpinoline. That is a mouth full, and there are plenty that are more difficult to write out, so we’re going to break down these popular terpenes weed in popular marijuana strains so you can try them out yourself. This is the fun part!

This terpene is the most common found in marijuana. It is found in some of the most popular indicas like Grandaddy Purple or Critical Kush, which are well known to help alleviate pain and help induce sleep. Strains with high contents of Myrcene are also known to be anti-carcinogenic. These strains have a woody, violet aroma, and can have an earthy taste. You may also note it makes your eyes very red and dries your mouth something fierce.
It is also found in popular hybrid marijuana strains like Pineapple Express and AK-47. These strains have skunky and tropical aromas, and spicy and herbal taste. Unlike the indica strains above, these strains are known for having an energizing effect and as a stress relief. They do all commonly share the dry eyes and mouth effect, and if you have a little too much you may become a little paranoid.

Most strains with Limonene as the prominent cannabis terpenes are hybrid marijuana strains. This terpene also has some pretty amazing medicinal value, it is known to improve your immune system, and it can help with mood disorders. Some absolutely delicious and popular strains like Wedding cake and Sour OG are heavy on the Limonene.

Here’s the fun part. Wedding cake will have a relaxing effect, a sweet vanilla aroma, a peppery taste, and you’ll need to tame your libido and your hunger because they will be at full force. Sour OG, on the other hand, will have an energizing effect, a pungent piney scent, and make you talkative and wear a smile across your face. Both strains are also known to make people dizzy if they consume a bit too much.

These THC terpenes are mostly found in Hybrid marijuana but can be found on the whole spectrum from Indica to Sativa. You will recognize Pinene for its, you guessed it, piney aroma and woody herbal taste. Some famous strains with Pinene are Jack Herer and OG Kush. These strains are known for their energetic, euphoric effects, and medicinally can be used as an anti-inflammatory, antihistamine, antioxidant, and even as a bronchodilator.

Did we save the best THC terpenes for last? Who knows, but one blogger found out how much he liked these cannabis terpenes simply by doing a little research for this post. Strains from the whole spectrum have Terpinolene as the dominant terpene, and it produces some of the most delicious and pungent Sativa strains in the world like Jack Herer and Durban Poison. These buds will stink up your room, taste like herbs, and if you like to wake and bake there is no better way to start the day. They will lift you up, energize you, and keep you lifted to take on the day without a cloudy thought. Of course you can find a nice indica strain like Super Kush, but even then this isn’t the terpene to smoke and try to go to sleep. Now that you have learned the general answer to what are terpenes in weed there are many more cannabis terpenes and terpenes in weed left undiscussed here, but the information should be available at your local dispensary. You can always ask the specialists at Releaf Medical Marijuana Doctor and they will eagerly guide you through the smorgasbord of options and combinations. Some of these terpenes in weed will be exactly what you are looking for, but they may be combined with other components like cannabinoids to produce an undesirable entourage effect, so it is recommended to keep a journal of your experimenting, so you can keep track of your strain likes and dislikes. Once patients are able to identify the terpenes weed that work best for them they can find other similar products that will help them achieve freedom from their debilitating medical conditions. We live in a wonderful age where we can pick and choose elements of our marijuana to cater exactly to our needs, what a time to be alive. Always consume responsibly and ask your doctor about professional recommendations.

If you would like to do further research on what are terpenes in weed, Releaf Medical recommends downloading this cannabis terpenes chart.

Get Your Medical Marijuana Card Today!